One of my friends sent me a message.  "What are you doing Sunday? I might snowshoe."

It's only Monday, I thought.  I can't plan that far ahead.

I like to think of myself as a planner, but really, I'm not.  I never intended to fight fire for more than a few seasons, yet here I am still doing it.  Most of my international trips were decided on a whim.  I chose to go to Antarctica only a month before the ship departed from Argentina.

People who are good planners seem to have a road map of their lives written ahead of time.  They save a lot more money, move higher up in management, and know what they're doing on the weekend even if it's only Monday.  Sometimes I wish I was more this way.

Still, there is a lot of joy in spontaneity.  If the weather turns bad, you don't have to bail on people or be miserable because you are locked into something far in advance.  You can accept a last minute invitation.  If you find a great flight and have the time, you can go somewhere great like Antarctica (and because I waited till the last minute, I paid half the price that my fellow passengers paid a year in advance).

Yesterday, I was annoyed at myself that I hadn't planned anything for a sunny Sunday.  At 9:30 I sent a friend a message.  "Want to hike to Garry Lookout?"  "Yes!" she replied immediately.  We happily snowshoed up the trail, my lack of planning ahead paying off yet again. 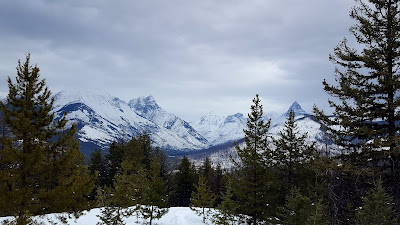 Life skills I learned from firefighting

I've learned a lot over my years of fighting wildland fires.  I know about weather patterns, and how terrain can influence how fire spreads across the landscape.  I understand helicopter flight manuals, and can sharpen a Pulaski so it will cut with precision.  Those are all important things, but this career has also given me other, unexpected abilities.

Most morning briefings at fire camp start around 5:30 a.m.  The hotshot crew I was once on was expected to break camp and be ready to go at this time.  Those who unfortunately slept in had pine cones thrown at them by the superintendent accompanied by some yelling.  In those days everyone slept in the open under the same yellow tarp.  Early morning rustling with plastic bags and unzipping of sleeping bags earned you the ire of others.  Thus, you had to be really quick if you wanted to be dressed, have contacts in, and have already visited the bathroom before you were supposed to be in line for breakfast.  To this day I can get ready very fast.

A related skill I have is being able to wake up without an alarm.  I never set one, unless I have an early morning flight, and even then I wake up and turn it off before it rings.  All those years of crew bosses looming over us in the darkness about to yell, "Get up!" must have paid off.

As a firefighter, you learn to sleep like a cat.  You can pretty much sleep anywhere, including on crew buggies, rocks, and next to a fireline.  I'm good at sleeping on planes, trains, and buses.  The downside is that I wake up easily, something you must be able to do as a firefighter, in case the helicopter shows up, the fire comes to life, or a safety officer comes down the trail.

I've traveled with people who have to have coffee first thing, or who need to stop at prescribed times to eat.  You can't do this on fires.  I've gone without food, eaten dinner from gas stations, and gotten creative with MRE condiments. As a result, I'm ok with throwing a couple of energy bars in my pack when I hike, or having snacks for dinner when I travel.  Eating on the run (or on the helispot) has made me a lot more food-flexible.

I'm used to being dirty, tired, too hot, too cold, and surrounded by bugs.  I'm used to carrying heavy stuff and wearing uncomfortable clothes.  So now when I'm on the trail, these things rarely bother me.  No bathroom? Sloping campsite? Drenching rain? I've encountered it so much on the job, I'm used to it.

When I'm done fighting fire, and I no longer commute in helicopters, it won't matter whether I remember the right mix for the drip torch, or how to complete a helicopter load calculation.  But my time as a firefighter has shaped my life in so many ways, some of which I'm still learning.  It will always be a part of me. 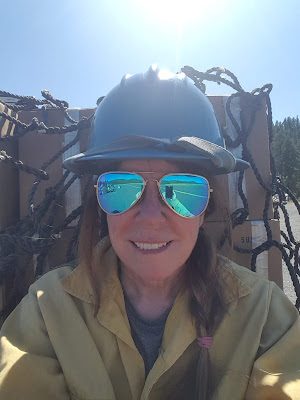 I brought in a rubber tote from the garage. In it are years of photographs, many on prints and negatives but hundreds on slides.  This box has followed me for decades through many moves and many broken resolutions to finally scan all the images.

Looking through the pictures, I realize that essentially I took all of them for myself.  Occasionally other people were interested in seeing them or were forced to (relatives, partners, coworkers), but for the most part they stayed in photo albums, slide boxes, or envelopes.  There was no social media to post them to for people to press a "like" button and comment.  In the earlier years, there wasn't even a way to preview them to see if you looked fat or weird, or if the picture even came out.  You took them into the photo lab, took the risk of double prints, and hoped for the best.

Now with one click on a phone you can upload a photo.  If you don't like the way it looks, you can alter nature by adding a filter.  You can smooth out your wrinkles and photoshop strangers out of a waterfall shot.  You can even post photos of an activity while you are doing said activity.

I like seeing people's pictures.  In fact, I snooze or unfollow a lot of people on Facebook without them knowing, if all they post is political diatribes and mean memes. I would rather see hiking pictures.  I like seeing their kitties and doggos.

But there's a downside.  Social media has made it possible for people to travel places without any research and without any caring for the land.  They see photos and want to go there, so they do.  They trample the superblooms in California and Arizona so strangers will "like" the pictures.  They take wedding photos standing on fragile moss. Some formerly secret places have been ruined by the influx of visitors.

Of course, some of this disregard for the land has always happened.  People have always cut switchbacks,  left trash, carved their names in trees, and been generally oblivious to the damage they do.  But social media has caused an explosion in this activity.

Sometimes I wish the internet would go away (she says, as she types in a blog on the internet).  It won't though, so all I can do is be aware of my habits in my corner of the world, and treat the places I go well.  I'll keep some of them secret, and let people find them for themselves.  And I'll treasure the box of memories that I have, back when I went places and nobody knew. 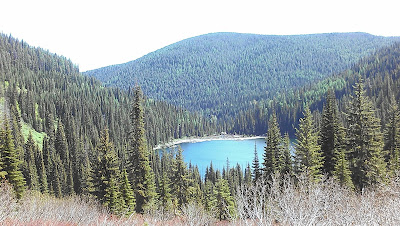 I parked at the road closure.  Normally the trail I was going to hike was accessed at a campground.  Being short and easy, it gets mobbed in the summer, not to mention the bustle of the campground itself.  I would never venture here then.  But now, it was a different story.  Because snow closes access to the trailhead, this would be a deserted six mile walk.

I hiked along the bike path, now buried by snow and ice.  Because it's been a mild winter, I didn't need snowshoes, only microspikes.  The path passed several cabins, seasonal inholdings boarded up for winter.  I briefly imagined living in one of them, accessing it by skis and enjoying the solitude. But they are only summer cabins, and there was no footprints around any of them.  I continued on into the silent campground.

It was hard to believe that this campground would be full of activity in only a few months.  I took a detour down to the beach, where the lake was framed by mountains covered in white.  There was nobody around. 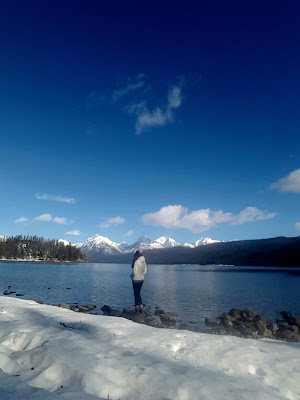 The trail itself climbed gently to an overlook point.  Some snowshoers clattered down the path, probably deciding they would rather wear them than carry them.  I had the point to myself, something that would never happen in the summer.

Readers of this blog, and honestly anyone who knows me, know that I love summer and summer hiking.  But winter, with its lack of tourists and even most local hikers, lets me get to these places that normally are overrun with people.  It allows me to appreciate the little things, like a snow covered bike path and a quiet campground.  It's easy to get caught up in the idea that I should always be striving for an epic outing, climbing a peak or covering hard miles.  But there's just as much beauty in places like this. 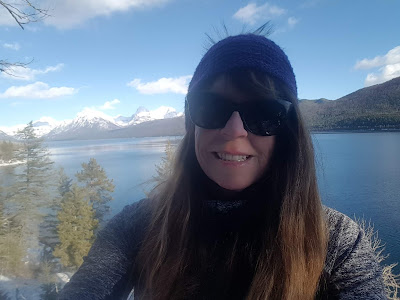