The ski hill closed almost a month early. The gyms soon followed, and then the national park. It was time to get creative.

Fortunately, I wasn't bothered. I've spent much of my career working where there were no gyms, or mediocre work ones with a rickety bike and a dumbbell or two. I also go on the road for work which means searching out hotel gyms or places to run that won't kill me. I've always liked exercising outside much more than in a room surrounded by strangers.

I borrowed some dumbbells and started using my old, but good stationary bike more. I run on the trails by my house. I find myself walking and hiking a lot more, even if it's only an hour at a time.

I started hiking up the local ski hill. Absent the usual crowds, it's easy to find a deserted run to snowshoe or walk up. From there I can gaze out into the forbidden park or at the lake far below. No bears lurk there, so I can hike without yelling or having bear spray at the ready.

Lifting weights at home, when I can watch Survivor  educational programming, and not try to work around the bros who sit on machines while scrolling social media or tie up two machines at a time, has been much more enjoyable, as has eliminating the commute to get to the gym. Going out for a hike on a day when I might have defaulted to the elliptical makes me feel better.

Some people are having a hard time with their gyms closed. The gym is their comfort zone and their therapy. But it's good to get out of that zone and to challenge yourself in different ways. Your body wants to be outside and moving in the fresh air. Take it there!

I don't miss the gym at all. I might not go back. 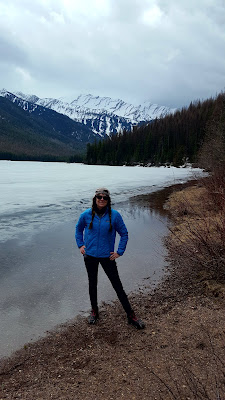 My state is opening back up, which means I'll return to the office soon.  For the past five weeks or so, I've been working from home.  What's it been like? Apart from a few issues (employees with computer problems, endless video calls), it's been pretty great.

At first it was a little hard to get used to.  I slouched out to the kitchen table wearing yoga pants and a hoody.  Why was everyone sending so many emails? What was this video chat nightmare, and how was my cat able to create a new folder on my desktop by merely walking across the keyboard?

Soon, though, I got used to it.  I surveyed my closet and decided to start wearing dresses and skirts. After all, I can't wear them to work.  There are no dresses in firefighting!  Without the distractions of the office, I was able to get a lot more done.  My hour commute became a few seconds.  Since everyone else was sheltering in place, they were less likely to flee to the field, leaving calls and emails unanswered.

I had a real kitchen (we don't have one at work)!  My cats happily "helped" by sending instant messages to people.  I looked outside and saw my trees and the green grass starting to come up.  I spied on the weird neighbors who appear to be building an illegal camping facility with outhouses on their property.  I sat in my hot tub at lunch time!

Yet the office awaits.  It somewhat resembles a hoarder home with the stuff that would freeze during the winter jammed in the only small room with heat.  Projects that we would normally have completed by now will have to be frantically done in a few days before the seasonal workforce starts.  But it has to be done; fires won't fight themselves, and we have already had a few.

I hate the reason why I spent the last five weeks working from home, but I loved being there.

Return of the Lone Ranger

Once upon a time, I was mostly a solo hiker.  I love hiking alone.  I can walk at whatever pace I want, stop where I want to stop, and change my mind about where I want to go.  I can wake up in the morning and decide I want to go to a lake, or scrap my plans entirely and go kayaking, without anyone else getting upset.  I hiked and backpacked mostly alone for years.

But then I moved to a place with lots of grizzly bears.  It's much safer to be in a group if there are bears around.  More people can make noise, and a bunch of people look more intimidating to a bear than just one person.  I figured I had better become more social.

I met some nice people.  Some I met in a meetup group, but most through others.  I met a couple of them sitting by a waterfall.  Some I see more often than others, but when we hike we pick up where we left off.  Although I can't be quite as spontaneous (turns out other people like to plan ahead), it pays off in other ways.  If I wake up and it's cold and I feel lazy, I still have to go so I don't let them down, and I'm always glad I went.  I get to see places I didn't know existed, and to share beautiful spots with others.

Now, because I'm trying to be a responsible public lands user and social distancer, I am alone again.  The national park is closed, but the enormous forest is still open.  The bears are awake now though, and can be somewhat surly this time of year.  They're hungry, and they have young cubs.  So I'm limiting myself to safer places.

Right now that means a weekly jaunt up the ski hill.  They were forced to close early due to the virus, but there is an enthusiastic contingent of locals who hike up and ski down.  The snow conditions are too rough for me to haul my snowboard, but I bring my snowshoes.  Alone, I set off up a lesser used route to the summit, 2000 feet above.  There is usually nobody there.  Last weekend it was a brisk 11 degrees.  I look longingly at the peaks in the park in the distance.  It's too cold to linger, and I take another route down, one that winds past a statue we call Mountain Jesus.  Far below, a blue lake sparkles.

I know a lot of people are hiking with others.  They say they are staying 6 feet apart and carpooling, or they just aren't worrying about it.  As the snow melts, and we get fewer cases in my town, I may start venturing out with my friends again.  I miss them, and I miss getting into wilder territory.  But for now I walk alone in familiar places. 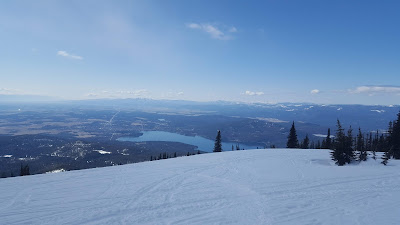 I don't know why a pandemic has brought out the judgey people (never mind all the conspiracy theorists in my town), but here they are.  There is a smug meme going around proclaiming that if you don't come out of this stay at home order with a new skill or more knowledge, you're just lazy.

Oh, shut up.  First of all, a lot of us are still working.  Many of us are essential workers.  Some are parents trying to home school their kids.  Most of the people who are laid off are worried about making ends meet or when they can open up their business again.  Nobody needs to hear that they are lazy for doing the best they can.

This is an unprecedented situation.  I personally think that whatever people can find to do right now, as long as it isn't illegal, unethical or immoral, is all right.  Work out a lot, or take a break.  Feel free to ignore all those "home workouts" that people keep posting; most of them aren't certified trainers and I think we all know what a squat is.  Hike if you can: follow social distancing and please be prepared; now isn't the time to put rescuers at risk.  Try to eat well, but if sometimes you eat more candy than normal, don't beat yourself up.

It's not selfish to mourn trips you can't take, or events you have to postpone.  It's all right not to miss the gym, or to be relieved that you have more time alone.  If that work project takes a little longer than it would have two months ago, give yourself some slack.

I'm not learning a new skill.  My house is only marginally cleaner than when I worked all day in an office.  I still eat too much chocolate.  But I go trail running in the woods by my house and lift some dumbbells.  When it warms up a little I'll work in my yard.  I message my hiking friends to make sure they are ok.  I'm reading books.  My cats are happy that I'm home more.  And that's enough. 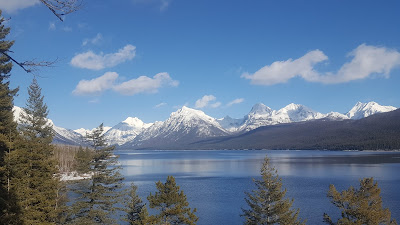 I keep typing new posts, but erasing them.  Nothing seems interesting or appropriate right now.  I'm teleworking; however, eventually fires will need to be fought and we will have to go out into the world to do so.  My current coworkers, two fluffy black cats, are doing their best to send out gibberish skype messages on my work computer and otherwise distract me.

If you can hike, bike, run or just get outside safely, do it.  Otherwise please stay home and stay healthy.