Travel in the time of corona

No, not international travel *sigh*.  My Greenland dream may be over for good. But I had to go see my parents, so I nervously arrived at the airport.

I live in a resort area with a famous national park, so there are lots of tourists. Most don't seem to care about the virus or the fact that they might be bringing it here. They are here in droves. They also roamed the small airport, many with their mandatory masks off or only covering their mouths. I was apprehensive. Was this how the rest of the trip was going to go, I wondered, dodging some maskless bros who were loudly talking about their travels.

Actually, I was pleasantly surprised. We boarded the plane five rows at a time. There were no endless lines waiting for people to shove their enormous roller bags in the overhead bin. Middle seats were blocked out. Masks were required. The flight attendant handed out alcohol wipes to everyone to clean off their tray tables and surrounding areas. The plane was fogged with disinfectant before we got in.

Deplaning, the most dreaded part of flying for me, was actually okay. People weren't allowed to stand up and get in the aisles until the row in front of them had departed. There was no more standing in slow moving lines in the aisle, being bumped by someone's duffel, waiting for someone to pull their suitcase out of the bin. Everyone was courteous. What was this sorcery?

Arriving at the Minneapolis airport, I braced myself for crowds during my layover. Instead, it was deserted. There were acres of empty gates with charging ports to hang out in. Nobody approached with stinky food to sit next to me. There were no loud cell phone conversations near me. It could actually be considered pleasant.

As I sprawled out in a row of three seats on the way back, I was reminded that flying used to be like this: empty seats, less stressed people, and whole gate areas with nobody in them. I know that airlines have been hit hard financially, and this affects the economy, but I couldn't help thinking, this would be great if flying was like this again. I love travel, but usually the worst part is actually getting there.

My disclaimer alert is this: I flew on Delta, and my experience might not be yours. However, I felt safer flying than I do going in some of the stores in my town, what with all the anti-maskers and covid deniers here. I wouldn't be afraid to fly again. 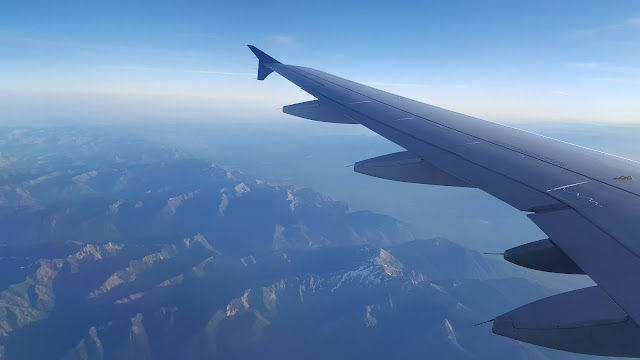 I hiked along the trail, feeling optimistic. It seemed easier than the last time I hiked it. This was probably due to the fact that last time I had backpacked up to the lookout for the night, hauling up extra clothes, a sleeping bag and pad, and lots of food. But I chose to think that the rest of the day, which involved a stiff climb up a trailless peak, accompanied by a bushwhack that was described as negotiating "a ridiculous amount of downed trees," wouldn't be so bad.
We sat at the fire lookout, debating. The trail alone was 12 miles round trip; a trip report on a peakbagging website stated that it took the climbers five more hours to summit the peak and return to the lookout. But the days were long and we were already here. How bad could it be? We would try it. We set a turn around time, one that, similar to doomed Everest climbers, we would then ignore.
We set off into the woods and soon found ourselves thrashing through a steep forest of alders, dead trees, and other flourishing vegetation. Occasionally a game trail would give us hope, only to fade out or head in the wrong direction. Bears probably didn't want to walk in here either. Finally we emerged on top of a nearly 8000' foot peak. 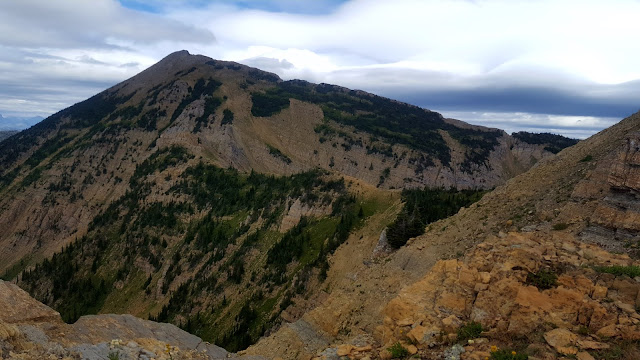 From here, the route to the main mountain was described as "an easy ridge walk." These are not the words I would use. We downclimbed. losing elevation and then gaining it again. There were some problem cliffs to avoid. There may have been some whining on some scary scree. The wind picked up just to make it more sporty. I arrived at the summit, glanced at the USGS marker, and immediately turned to leave.
By then it had started to rain, making the downclimb less pleasant. We counted how many times we fell, tripped up by slippery beargrass and roots. Stumbling out of the woods, we found the fire lookout to be a pleasant sight. 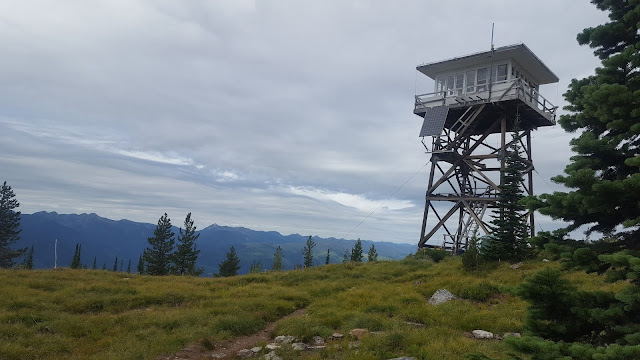 We still had six miles to go though, and if we didn't hustle, we would be hiking out in the dark. We hurried along, at one point encountering a solo hiker we had seen on the peak. "Are you guys from here? And you bag peaks?" he asked. Yes. Yes, we do! Happily we reached the trailhead. The sun was setting. We had a two hour drive ahead of us. We were tired, but happy.
We aren't young anymore like some of the hikers we meet on our adventures. Sometimes we get nervous on terrain that at one time we might have scampered up without a second thought. We get aches and pains, and we are more cautious of our knees than we used to be. But we are still out there, doing hard things.  And having adventures.
Posted by Lynn at 6:35 PM 4 comments:

Operation CSI: Bird was in progress. The perps were apparently using the side of my house as their personal restroom, but where were they?
I looked up and saw it. A small, delicate nest perched on a wind chime. In it, two little long-beaked babies sat, watching me quietly. Hummingbirds!
How had this whole operation been going on above my head for so long without me seeing it? The adult bird must have come and gone, collecting fluff and twigs. Then she sat on the eggs, while I went in and out of the door.  Now the babies were fully feathered and bright eyed, almost as big as their mom.
I obsessively watched them for the next few days. I worried if I didn't see the adult. When one baby walked out onto the wind chime, I kept checking on it until it returned to the nest.
One night I came home from work and checked on them as usual. One bird was gone from the nest! I anxiously looked around on the ground, fearing the worst. Not finding anything, I went to turn on the sprinkler. When I came back, the next was empty. I missed seeing the final bird take its first flight by only a few seconds.
When hummingbird babies leave the nest, they don't return. The parents may use the nest the next year, but often it is so fragile that it falls apart over the winter.  I knew the babies were around somewhere, but they were hard to see, although I kept looking.
I felt sad. I missed them and wondered if they were all right.  Although I knew they might leave the area, I bought a hummingbird feeder and hung it up in a tree.
The next day, a flash of brown caught my eye.  One of the babies swooped down onto the feeder.  Then it disappeared into the woods.
While I still wish I had gotten to see their freedom flight, I was glad to see the little bird flying around. It made me happy. 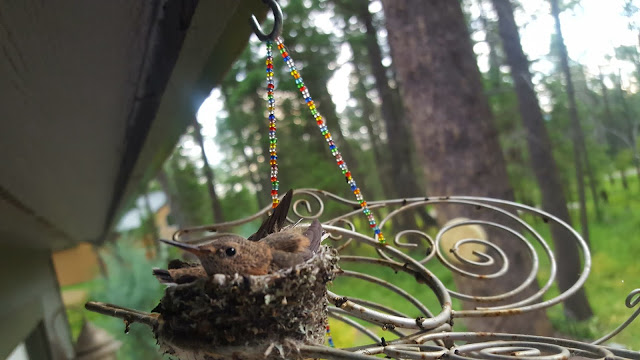