One thing that kept me going through all the years of overtime, employee supervision, and having no real summers for over 30 years was the thought of retirement. When I retire, I thought, I'm going to do ALL THE TRAVEL. No longer would I be limited to the southern hemisphere because the only time I had free was in the winter. Now I could travel in the spring and summer! Norway, Greenland, Switzerland, here I come!

Um, no. I can't plan anything, due to the virus. It's iffy if other countries will let us in by the summer, and the vaccination is a long ways off for me, due to not being in any high risk groups. I know people who are happily going to Mexico and other tropical destinations right now, but personally I just don't feel right about that yet. I'm even hesitant to plan road trips right now, although I could probably stay pretty distant from others. So, staying local it is.

I knew vaguely of a lake only a few miles from my house, but for some reason I had never visited it. One day while hiking, B. mentioned that she had skied on it. My ears perked up. Most of our winter so far has been mild, so many lakes hadn't frozen over. I looked up the ice fishing report. Eight inches of ice, that could hold a snowmobile! I packed up my microspikes and headed over.

There were only a couple of people on the lake. They were ice fishing, with varied degrees of seriousness. I started hiking around the perimeter on the ice. It was quiet. A few snow flurries came and went, temporarily obscuring the mountains. The lake was three miles around; I walked a couple of laps.

It's not Iceland or even Sedona, but it'll do for now. I don't know when, if ever, I would have gone to this lake, but now I plan to take my kayak there in the summer. If I can't travel this summer, there are a couple of backpacking trips I want to take; one is to a backcountry lake I saw once from the air, that will require a packraft and a few miles of bushwhacking. For now, I'll be happy with what I have. 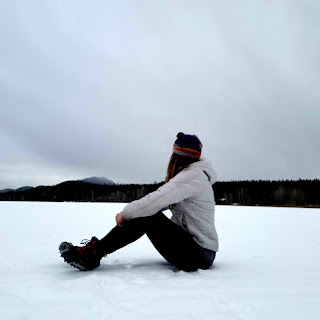