The season of indecision

Here in the mountains, it's not really winter, but not quite spring. We're used to packing all sorts of things no matter the season (I've been snowed on in July and August, and seen 60 degrees in February), but this time of year is particularly difficult.

B. and I hesitated at the trailhead. Snowshoes or microspikes? The snow looked packed down at the start, but you never knew what it would be like fifteen hundred feet higher.  We strapped the snowshoes on our packs, pretty sure we wouldn't need them, but not willing to turn around or post hole. I once carried snowshoes up a trail 5 miles and 5000 feet in elevation gain, only to not need them and carry them all the way back down. On the other hand, I've followed tracks where someone, snowshoe-less, had miserably fallen in for miles.

Ski pants or leggings? Take the hand warmers or not? Bear spray? Just kidding, always bear spray. As we hike up the hills, we take off layers, switch out wool hats for baseball caps, remove gloves; then when we arrive at the frozen lake, put it all back on. The sun peeks out from behind a cloud and we get warm again, then the wind blows across the ice and we shiver.

Most people I know just take it all. Rain jacket, even though it's not supposed to snow at all, because then it probably will. Trekking poles, on trails where they're not needed in summer, because of ice. Matches, even on a 4 mile trail, because there are so many stories about hikers lost in blizzards. Both gloves and mittens, because cold hands are the worst. And snowshoes, even though, as I suspected, we carried them all the way to the lake and back. Once there, though, we spotted the lone hiker ahead of us, and saw that he had done the same thing.

Even with all the layering and unlayering, superfluous gear, and uncertainty, I love hiking this time of year. The mountains are covered in snow, there are less people and bears around, and there is a hint of warmth in the wind. Spring isn't here, but it's right around the corner. 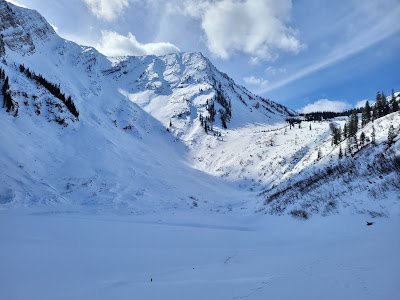