I was on my porch when a small, green-backed hummingbird buzzed me. She flew around me for a few seconds, and then hovered near last year's nest in my wind chime. Could it be last year's mother, come to nest again? It was impossible to tell, but she seemed very familiar with my back yard, visiting the feeder and immediately taking up residence in the nest.

I instantly instituted Operation Hummingbird Success. Forays near the nest had to be done with caution. Visitors were banned from loud talking. I hung around the window. obsessively checking on the status of the mother bird. If she disappeared for while, I fretted. Where was she? The nest was too high for me to look into it without a ladder, and I didn't want to scare her off. When she appeared again I breathed a sigh of relief.

I went away for a week and immediately checked on the nest. The mom flew in and appeared to be feeding babies! This brought a new concern: what if something happened to her when she was out foraging? But the mother bird, a single mom (the father doesn't even help build the nest), always came back. Soon, I could see little beaks poking up out of the nest. After that, it didn't take long to start seeing the babies. 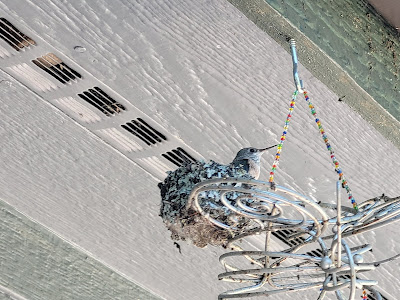 I watched them as they stretched and flapped their wings. One was bigger and bolder than the other; it sat on the edge of the nest, looking around curiously. One day I walked around the back of the house to see only one baby left. Worried, I scoured the trees with binoculars until I spotted the adventurous one, sitting on a nearby branch. I watched as the mother came to feed it there.

The other little bird waited a day, and then it was gone as well. The mother came back to the nest as if she were looking for it. After that day, I didn't see the babies again. This was unlike last year, when I saw the two babies flying around and eating from the feeder for a few days.

Are they doing well, merely chased off by the mother to find new territories, or did something happen to them? It's hard not knowing: I feel invested. Still, I try to imagine that first flight: what it was like to launch fearlessly into the air, doing something they had never done before, hurling themselves into the unknown. I prefer to think they are out there now, hovering helicopter-like over flowers, getting ready for that incredible miracle of migration. And I saw the mother today: she came and checked out the nest. Possibly she will have another brood this year.  If not, I look forward to seeing these little birds again next year. I love them. 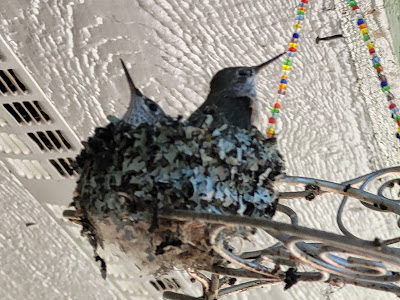